Man, around 65, suffers from urine loss after 2nd transurethral prostate resection (TURP). He wants to get rid of his incontinence. He was treated before in another practice with myofeedback and electrostimulation and would like to try the MAPLe now.

Patient underwent a TURP in 2013 as well as at the end of 2014 for the treatment of dysfunctional micturition. After the 2nd TURP patient suffers from a loss of urine of 500-1100 ml per day.

The goal is to reduce the loss of urine and improve awareness of the coordination and also improve the (duration) strength.

Patient has already undergone treatment with another pelvic physiotherapist. In that first part of the treatment the attention was focussed on explaining patient’s symptoms, on pelvic floor re-education, on toilet behaviour, on pelvic floor therapy as well as relaxation instructions.

In the second part of the course of treatment (12 treatments), the MAPLe was used.

During the first measurement with the MAPLe it appeared that the endurance, with an average of 10.8 µV, was low compared to other men and was also difficult to sustain. This contrary to the palpation during which the endurance seemed acceptable. In figure 1 you can see an almost entirely blue grid with EMG activity which indicates that there is less activity than average in men. 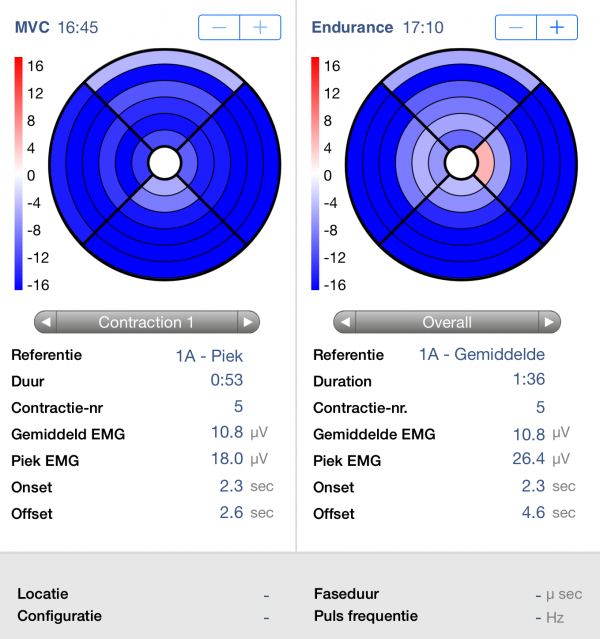 After the measurement, functional electrical stimulation (FES) was given at the location of ring 2 to ring 5 on the MAPLe probe with a phase duration of 300 µsec, a frequency of 50 Hz so that patient could feel the contraction. In the first six treatments, this configuration and setting were used at 40 contractions with a fade-in of 2 sec, a hold time of 5 sec and rest periods of 10 sec.

The contraction duration and intensity have increased. You can see more activity in the different rings, a strong improvement especially in the deep layers and the ventral side. See Figure 2 where the deeper layers are coloured red in the grid (= more activity than in healthy men) and the ventral side that has now become whiter (= activity equal to that in healthy men). It is also evident from the increased average endurance of 10.8 µV to 19.2 µV.

The patient’s loss of urine is decreased from using three incontinence pads per day to one.

Thanks to the use of the MAPLe, with the local stimulation at the ventral/urethral side, the patient could feel much better where he had to contract. This would not have been achieved with the current conventional equipment.