This case concerns a 35 year old woman with dyspareunia, coccyx pain post partum and irritation at the anus. The woman was being treated by a general physiotherapist in connection with coccyx problems and was referred to a pelvic physiotherapist concerning these problems.

She gave birth to her second son six months ago. She went to her general practitioner with pain in her coccyx and dyspareunia and was referred to the gynaecologist. She herself thought that the pain symptoms were caused by the scar. The gynaecologist confirmed high pelvic floor tension and referred her to the sex therapist. The sexologist prohibited penetration, and at the same she was referred to a pelvic physiotherapist.

When urinating she has symptoms of hesitation, urge urination, inefficient emptying, one urinary tract infection during pregnancy. With regard to defecation, she regularly has a Bristol stool scale of 2, regular constipation (in that case uses sachets) and sometimes complains of haemorrhoids.

From puberty she has had difficulty inserting a tampon and regularly suffers from fungal infections. During the 2nd pregnancy, coccyx problems, particularly when sitting. During the 2nd birth, she had an episiotomy on the left because of foetal distress. Before the births, intercourse was sometimes rather tender. The current pain symptoms occur at a different location. Excitement is good, and orgasm is not a problem.

Skin around the vagina is red and appears irritated. The introitus is narrow, palpation with 1 finger is possible without pain. The tone of the muscules is high with strand formation mainly on the left. The puborectalis is sensitive and the trigger point is on the left. Strength during contraction is weak to normal, lifting movement partial, relaxation after contraction is delayed and incomplete (for both rapid and sustained contraction).

After stretching of the puborectalis (which she could do well) relaxation improved and she could feel that she was better able to contract.

For an explanation of how to interpret the MAPLe Grid, see at the end of this case. 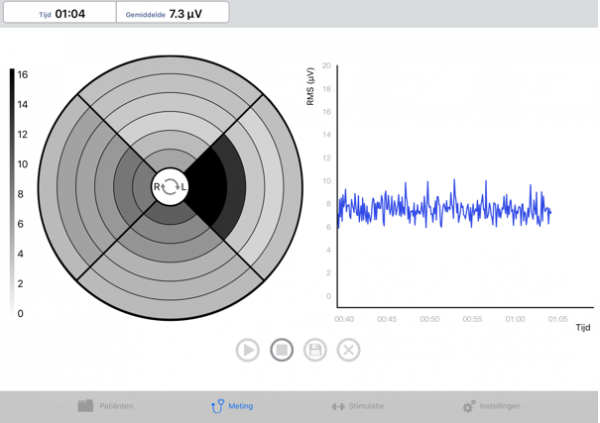 The EMG measurement confirms the findings of the vaginal palpation.

The graph (line chart, right) shows that the EMG activity is elevated and the deviations are big. In the MAPLe Grid (left) it can be seen that the increased activity occurs mainly deep on the left, at the site of the puborectalis and ilio- & pubococcygeus (deep). 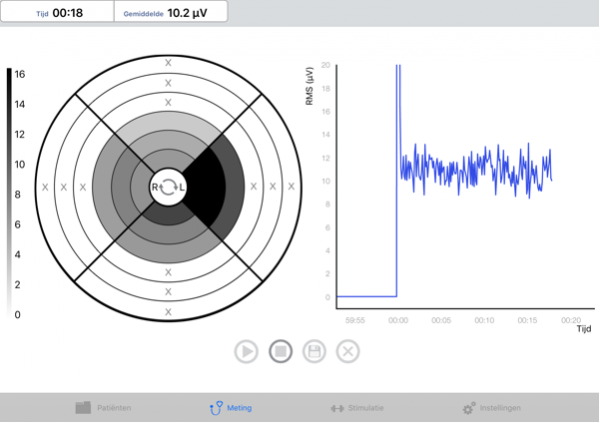 This is even more visible when the outside rings are expanded. The graph gives the average of the active rings. 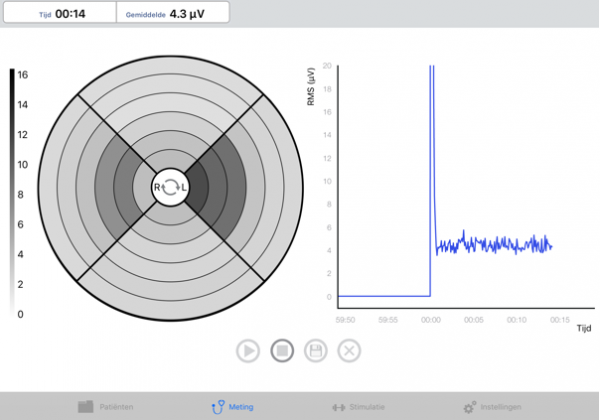 During the next appointment the patient states that she benefited from the mobilisation. Pain symptoms were reduced, but they returned (to a lesser extent) mainly when she was sitting for a longer period (she has a sedentary occupation).

The pelvic physiotherapist decides first to repeat mobilisation of the coccyx and then to do an EMG measurement. 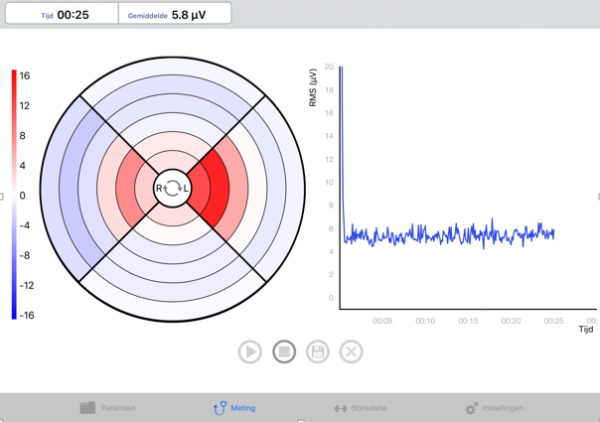 The graph shows that resting activity is lower than during the first treatment and that the EMG activity and the deviations are approximately the same as the second EMG measurement from the previous treatment (after first mobilisation of the coccyx). The MAPLe Grid shows that the activity deep on the left and, to a lesser extent, the right is too high (red) compared to the reference.

The pelvic physiotherapist then decided to treat the patient with electrostimulation with the aim of further improvement in the relaxation.

Parameters: frequency 2 Hz, phase duration 400 µs, continuous, ring 2-3, 10 min. The patient is instructed to relax the whole body as far as possible, observe the stimulus and breath low (towards the stimulus). Then, an EMG measurement is taken in order to reveal the effect of ES. 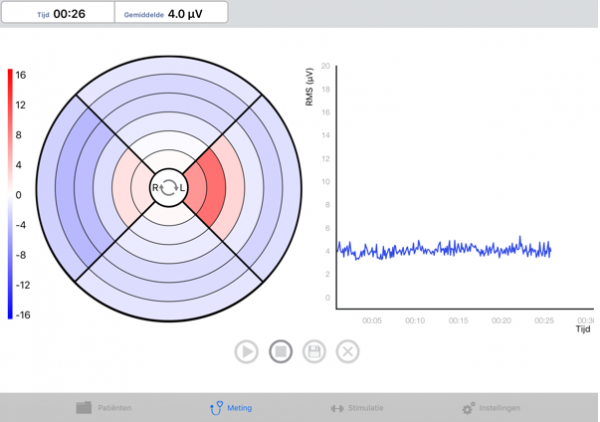 During the measurement immediately after electrostimulation, the Graph shows that the EMG activity has decreased slightly compared to the previous measurement and that the deviations have remained the same.

The MAPLe Grid shows that resting activity at depth is still too high compared with the reference values but that it has decreased further on both sides.

By means of the Grid, the location of the overactivity can be seen much more effectively in relation to the location of the problem both for the patient and the pelvic physiotherapist. The effect of the treatment can be seen immediately in both the Grid and the Graph. The patient is very happy that her complaint can be readily explained in this way. The fact is that, during the relaxation exercises she does not notice a change immediately, but this change can actually be seen immediately in the Grid and in the Graph after exercising. Because she sees the effect of the relaxation on the image, she becomes more motivated to exercise. After 4 treatments intercourse is pain-free. 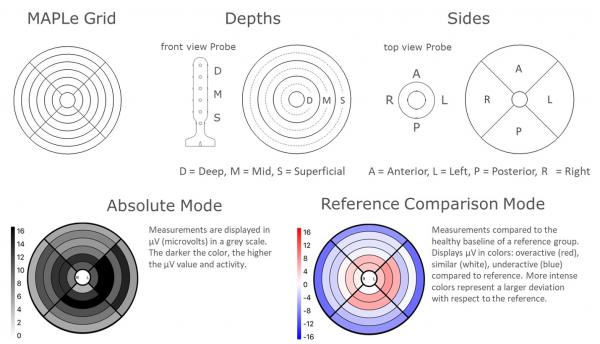